Taste tests were once a staple of TV commercials. Blindfolded participants––often labeled “a real person” or “not an actor”––sampled sodas, coffees, and other beverages. After declaring which one they liked the most, it was revealed that they’d chosen something other than their “favorite” drink. Today, the true tastemakers are professional tasters who help vintners produce the best wine and brewers the best beer. Having acute taste buds can mean more than a cushy job consuming pinot noir. According to a pair of recent studies, it can also predict outcomes for COVID-19.

Finding the Sweet in the Bitter

It’s likely that few diseases in modern history have focused so many of the planet’s top scientific minds. Perhaps only polio and AIDS came close––and while debilitating or even deadly, neither affected such a wide swath of people. The 1918 Spanish Flu pandemic was far deadlier, and the average age of death was many decades younger than for COVID-19––just 28 years old. Yet compared to the 21st century, medical research in the early 1900s was rudimentary.

Not long after severe acute respiratory syndrome-associated coronavirus-2 (SARS-CoV-2) was identified as causing COVID-19, many who contracted the illness complained of an unusual symptom: They lost the ability to taste or smell. While not universal, it was often mentioned by younger people who had displayed minor symptoms. In fact, some studies suggest that losing two out of the five senses is an early indicator––even in otherwise asymptomatic people.

The role taste plays in upper respiratory infections is widely known. Around 60% of people who contract common viruses like the cold or influenza lose their sense of smell which also affects their sense of taste. To see if taste can also predict how sick a person will become after contracting COVID, researchers at Baton Rouge General (BRG) embarked on an unusual study. Led by Dr. Henry P. Barham, the retrospective study looked at 100 people who had already tested positive for COVID-19. They were given four strips of paper which they placed on their tongue, one after the other. With each strip, they rated the intensity of the bitterness from 1 to 10. Researchers categorized the strips as bitter or mildly bitter.

When researchers examined how patients who didn’t detect any bitterness on the strips had fared during their bout with COVID-19, they found that all 21 “non-tasters” had been admitted to the hospital. None of the 79 “tasters” who detected mild bitterness were hospitalized. In fact, if they contracted COVID, they experienced only mild symptoms. This “bitterness divide” had already been predicted. That’s because people who do well detecting bitter tastes have demonstrated higher innate immunity.

Our bodies can learn to fight infection. Adaptive immunity occurs after our immune system initially encounters a specific pathogen and is able to successfully battle it later on. Unfortunately, this takes time. It can take a week before specific clones of B and T cells become activated and expand. Meanwhile, a virus can run rampant. Adaptive immunity is what happens after contracting a disease or after receiving a vaccine such as those designed to train the body to fight COVID-19.

Innate immunity is different. It’s older for one thing. Adaptive immunity has been around half-a-billion years old and is confined to vertebrates. Innate immunity can be found in invertebrates, even in plants. Best of all, it isn’t pathogen specific but rather uses a collection of phagocytic cells and proteins which innately know what a pathogen looks like. These can be summoned quickly to destroy any pathogen attempting to enter the body. Innate immune responses are why some 40% of people who contract COVID-19 don’t show any symptoms––especially T cells that successfully detected proteins along the virus’s surface. It’s why your dog can safely eat things that would make you sick. It may also explain the differences between supertasters and everyone else.  Further, their tastebud’s bitter taste receptors called T2Rs can actually be found in other cell types and offer a first line of defense against upper respiratory illness.

How do Supertasters Avoid Infection?

It’s important to understand that the fact that supertasters taste bitterness is not the mechanism by which they avoid infection with viruses like COVID-19. This expression of a gene just means that they also have an entire cascade of infection-fighting mechanisms that happen, such as greater mucus production, more efficient ciliary function, and higher production of nitric oxide, which help supertasters fight off invaders more efficiently.

The caveat is that our expression of this gene gets weaker as we get older. For example, you may have inherited the gene for brown hair. But as you age, the expression of that gene changes, and you start to turn grey. In the same way, supertasters can turn into tasters, or even non-tasters, as they age, which means that the expression of the cascade of infection-fighting mechanisms can weaken, too. We know that individuals who are over the age of 65 are more likely to die from COVID-19 regardless of their “taster” status.

When a virus infects tens of millions worldwide while killing over three million, the simplest solutions are often the best. Rural or impoverished regions could easily conduct this bitterness taste test and use it to allocate scarce vaccine supply or prepare hospital beds. Of course, the results are still preliminary and more studies will need to be done to be conclusive. 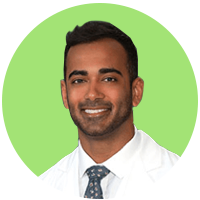 COVID-19 is a highly contagious disease that can cause long term damage to your lungs in the form of pneumonia and scarring.

Some patients with COVID-19 called "long haulers" have found themselves with symptoms that persist well beyond the usual timespan for a symptomatic patient.