Mushrooms are a mysterious fungi. Some of them are incredibly poisonous, some are profoundly hallucinogenic, and some just taste good. Many types of edible mushrooms have numerous health benefits. Mushrooms are good sources of protein and fiber, and they contain various vitamins, including vitamin B and vitamin D. In addition, most edible mushrooms contain an antioxidant called selenium, which is good for the immune system and has been shown to prevent cell and tissue damage in the body.

It’s estimated that there are between 2 and 3 million species of fungi on this planet and only a fraction of them have been researched by scientists. We don’t know much about the world of mushrooms, but every year we’re discovering more and more. A recent study published in the International Journal of Cancer may have even found a link between mushroom consumption and lowered risk of prostate cancer.

The study, published in September 2019, involved 36,000 Japanese men aged 40 to 79. Researchers recorded the participants’ health information, which included frequency of physical activity, family history of illness, and diet. The researchers followed the participants’ dietary habits over the course of an average of 13 years. At the end of the study, they found that men over 50 who ate mushrooms once or twice a week had an 8% lower risk of developing prostate cancer, while men in the same age group who ate mushrooms three or more times a week had a 17% lower risk. Furthermore, the researchers found that the apparent cancer-fighting benefit persisted regardless of the participants’ other dietary choices, such as frequency of meat, fruit, and vegetable consumption.

What Is It About Mushrooms?

The scientists weren’t sure what in mushrooms caused the shielding effect against prostate cancer. “The mechanism of the beneficial effects of mushrooms on prostate cancer remains uncertain,” said lead author Shu Zhang, PhD, of the Tohoku University School of Public Health in Japan, in a press release. It’s thought that the high levels of ergothioneine–an antioxidant found in most mushrooms–may play a role. Shiitake, oyster, maitake, and king oyster mushrooms all have high amounts of this antioxidant. 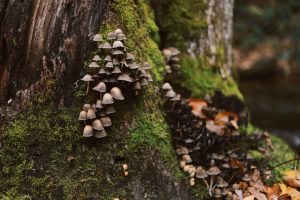 This isn’t the first time that mushrooms have been associated with a lower risk of cancer. Various studies have found that the turkey tail mushroom (Trametes versicolor) could help combat breast cancer by increasing the body’s ability to produce cancer-fighting cells. The turkey tail mushroom contains a compound called PSK, which is currently being studied for its ability to fight cancer. And mushrooms (including the turkey tail) have been used for anti-cancer purposes in both Chinese and Japanese traditional medicine.

As prostate cancer rates (and rates of all cancers, for that matter) in Japan are significantly lower than in the USA, maybe it’s time that we learned something from the Japanese and start including more mushrooms in our diets.

Eating right is vital for young people. In fact, according to a recent study kids who eat more fruits and veggies have better mental health.

What if there was an easy - and delicious - way to help reduce cholesterol levels? A recent study shows that eating pecans may help.

How To Manage Food Allergies

Food allergies affect 32 million Americans. The best way to avoid a trip to the emergency room is through careful food allergy management.